How a Horse is Helping a Child with a TBI

Traumatic brain injuries can cause a host of physical, social, cognitive, emotional and behavioral effects on a person. The outcomes of TBI can range from complete recovery to permanent disability or death. There are several causes of TBI and in most cases there are many lobes of the brain that are affected. TBI is a major cause of death and disability worldwide, especially in children and young adults. 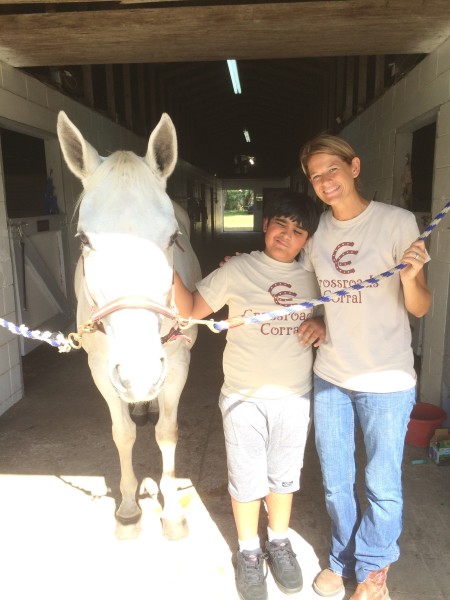 Let me tell you about a sweet, 8-year-old boy who we get the pleasure of spending time with on our farm for Equine Assisted Learning. This young boy had a routine surgery at the age of 6 and in the recovery room was given a medication that caused him to have a stroke. The effects of the stroke then caused a Traumatic Brain Injury (TBI). His Mom describes him as a previously “chatty” and outgoing child. Since the TBI he suffers from difficulty word finding and recall, expressive aphasia (difficulty speaking what he is thinking), decreased memory, difficulty reading and writing, involuntary movements, decreased lower extremity strength and trunk control and when he gets nervous he begins to laugh excessively and needs re-directed to stop the laughter. He loves to play with the hose so during our sessions we use that as a reward. He responds very well to visual cues and we use a behavior chart during his session. We also write a plan for the session and he gets great enjoyment by crossing activities off the list.

Let me walk you through a session we had last week:

The goals of this session were to work on personal recall,  writing letters he is having difficulty with, colors, word finding and expression. We use our 24-year-old gray quarter horse, Connie for his sessions as he has developed a connection with her.

Some sessions are much more challenging than others as every day  can be different for a person with a TBI. At Crossroads Corral he is  able to further is learning with the help from a horse named Connie. I  am so grateful to a  wonderful volunteer, Tracy, who is an  Occupational Therapy  Assistant and friend who helps with  his sessions. With her OT  brain and my PT and EAL brain we are  able to be creative and  conduct meaningful activities with the horse  that promote his  learning and growth. He has become very loving to  Ms. Connie giving  her a kiss on the cheek and saying, “I love her”. He  also has grown  quite fond of us, holding our hand as we walk around  the barn. There  is no doubt that he is building a connection, which is something he  has struggled with according to his Mom who is a Physical Therapist and extremely devoted to his care. We are so thankful to his wonderful family who allows him to spend time with Connie and us on the farm!

Lindsay Brim is the Co-Founder and Executive Director of Crossroads Corral. She is a proud wife, horse enthusiast, and mother of twins that is dedicated to her family, her friends, and her cause.